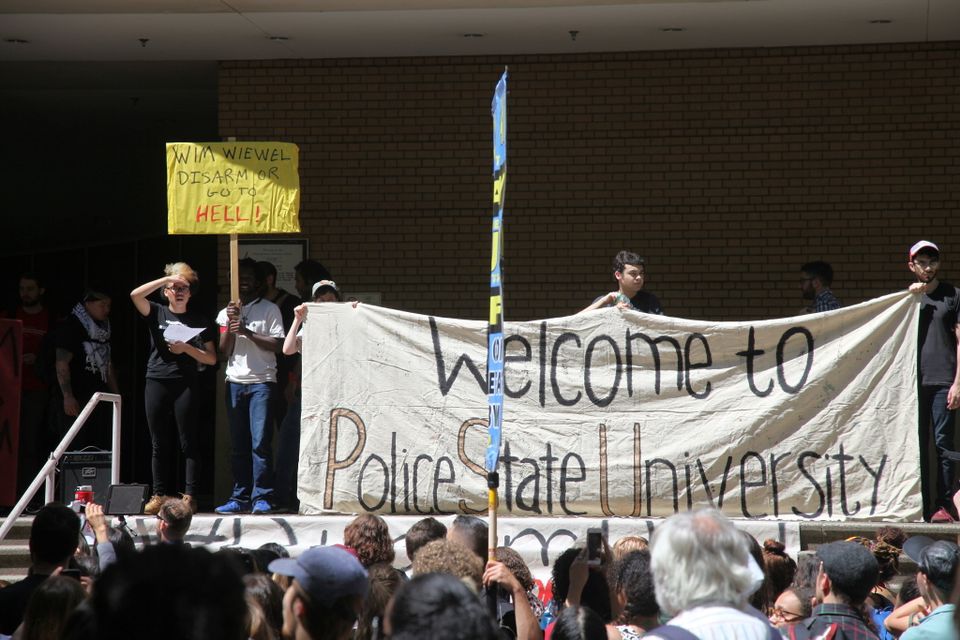 At 1:30 a.m on the morning of June 29th, Portland State University police murdered Jason Washington. Witnesses say Jason was attempting to break up an altercation in front of the Cheerful Tortoise Bar on SW 6th and College St. Police shot Jason when a gun he had kept in a holster fell, and he attempted to pick it up. His back was turned to the police when he was shot, as is made clear in bystander cell phone video. Two officers, Shawn McKenzie and James Dewey, are now on paid administrative leave as a result of the incident. We, the Portland State University Student Union, sincerely send our condolences to Jason’s friends and family.

The PSU Student Union has been organizing against the armament of PSU’s campus security ever since news that PSU’s Board of Trustees was considering armament surfaced in 2012. There was mass dissent throughout campus to the idea of arming campus security. Still, the Board voted in favor of armament in June of 2015. This dissent then transformed into the #DisarmPSU movement. We called to #DisarmPSU because we know that policing in this country is built atop an explicitly racist foundation, and in a city with a laundry list of people of color and disabled people who have been murdered by police, we saw no need to perpetuate this oppression on our campus.

The Campus Public Safety Office (CPSO) now consists of an armed and deputized police force trained through the same systems which train the horrifically violent Portland Police Bureau. The person who was shot by PSU police was said to have been shot six to eight times, according to witnesses nearby. Surely excessive force for somebody whose back was turned. Additionally, the campus police used excessive force just a couple of months ago when they thought a student was having a mental health crisis. The Board and previous PSU president Wim Wiewel made this decision for a multitude of reasons — but it was always clear to students, staff and faculty that the safety of our community was not one of them. In the decision making process they ardently criminalized houseless people, claiming they disturb the safety of our campus, something absolutely shameful in a city like Portland, with an acutely disturbing houseless crisis. They claimed armament could protect victims of sexual assault — yet three years later PSU has penalized students for standing up to a known rapist on campus.The Board of Trustees, Wim Wiewel and the entire PSU administration tried to tell us that the armament and deputization of CPSO would make our community safer, despite the voices of those they claim to represent. As we predicted, they were wrong.

This Sunday, July 1st, will be exactly three years to the day since the beginning of the three year initial roll out of CPSO’s armament and deputization of officers. Everyone who has expressed dissent over the years to the armament of CPSO and creation of a police force knew that one day this decision would result in deadly violence, and we know that it will continue to happen so long as campus security remain a deputized and armed police force. There’s no way around it — this is how policing works.

Officers McKenzie and Dewey have been granted paid administrative leave as so many officers who murder civilians often are, such as Darren Wilson who killed unarmed Black teen Michael Brown in Ferguson, Missouri. His non indictment for this murder occurred same day PSU approved to move forward with armament. The PSU Board of Trustees, and Wim Wiewel, now have the death of Jason Washington on their hands, as well as the trauma caused to the bystanders who witnessed the murder. We also call on current PSU president Rahmat Shoureshi to stand in solidarity with students and against the recent actions of campus security. We challenge Shoureshi to be a voice in the administration for the disarmament of campus security. Shoureshi does not get to evade responsibility for the actions of Wim Wiewel. We know you’re not Wim. That’s not good enough

We have been, and continue to be disgusted at the utter disregard for student and community safety which is constantly seen at Portland State, and we are heartbroken that this disregard has now resulted in fatal consequences. It is because of this that we call on all PSU students, staff and faculty, #DisarmPSU supporters and media to rally with us in Pioneer Square at 5:00 pm on Sunday, July 1st. We refuse to stand idly by, letting CPSO get away with killing an innocent person of color. We refuse to accept a society where police kill with impunity. #DisarmPSU is not just about our campus. It is part of a call to fundamentally change the methods through which we seek safety and justice. Under our current capitalist system police are meant to protect wealth, power and property — not people. Community safety looks like members of the community having a voice in the systems meant to protect them — not an all-powerful armed force that shoots to kill. Don’t let PSU get away with murder. Join us. #DisarmPSU!