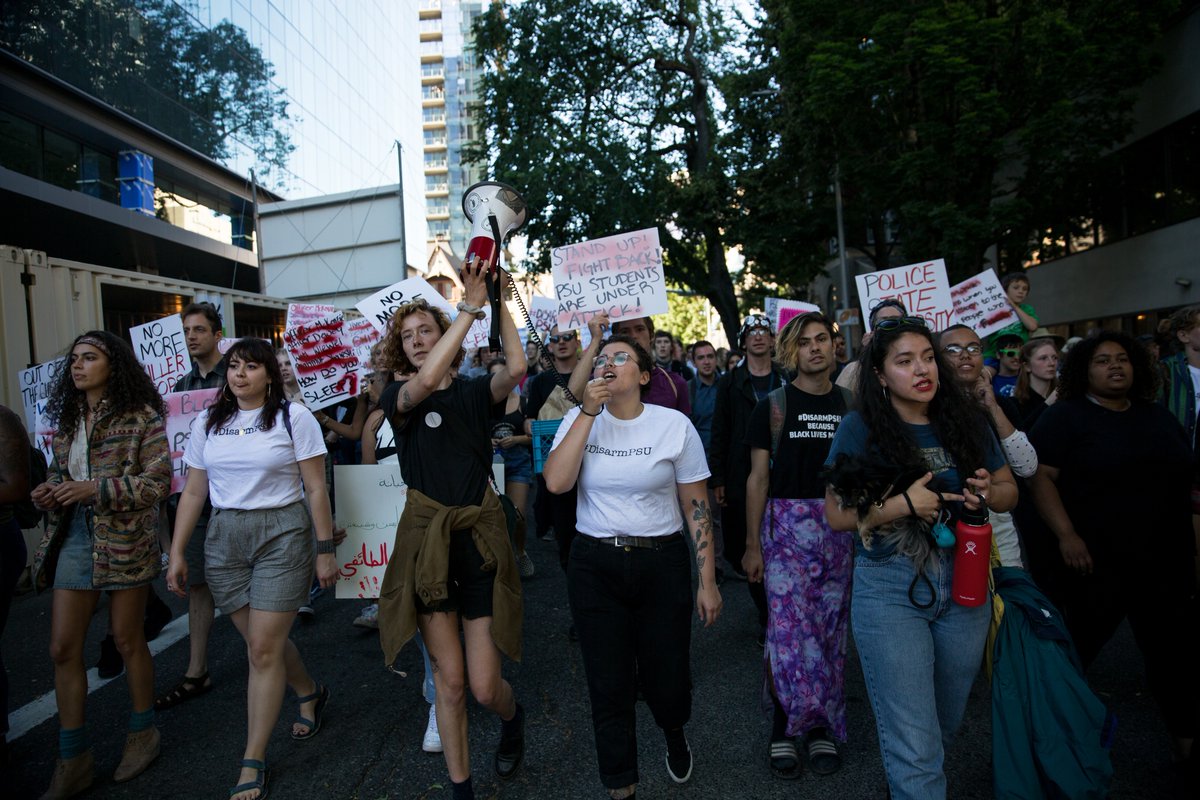 Portland State University students, alumni, faculty, and community members rallied and marched to #DisarmPSU on July 1st, 2018, three years after the first officers were sworn and armed. This rally came after the campus police murder of Jason Washington on June 29th. Family and friends of Jason Washington also joined our rally in solidarity and to mourn the loss of their loved one.

The Portland State University Student Union (PSUSU) organized this emergency action upon learning the news of the tragic, senseless murder of Jason Washington. We commenced our action at Pioneer Courthouse Square to a crowd of a few hundred. PSUSU members talked about the history of #DisarmPSU and how the decision was made. We called out the former university president, Wim Wiewel, and the PSU Board of Trustees for their decision to create a campus police force despite opposition from students, staff, faculty, and community members. 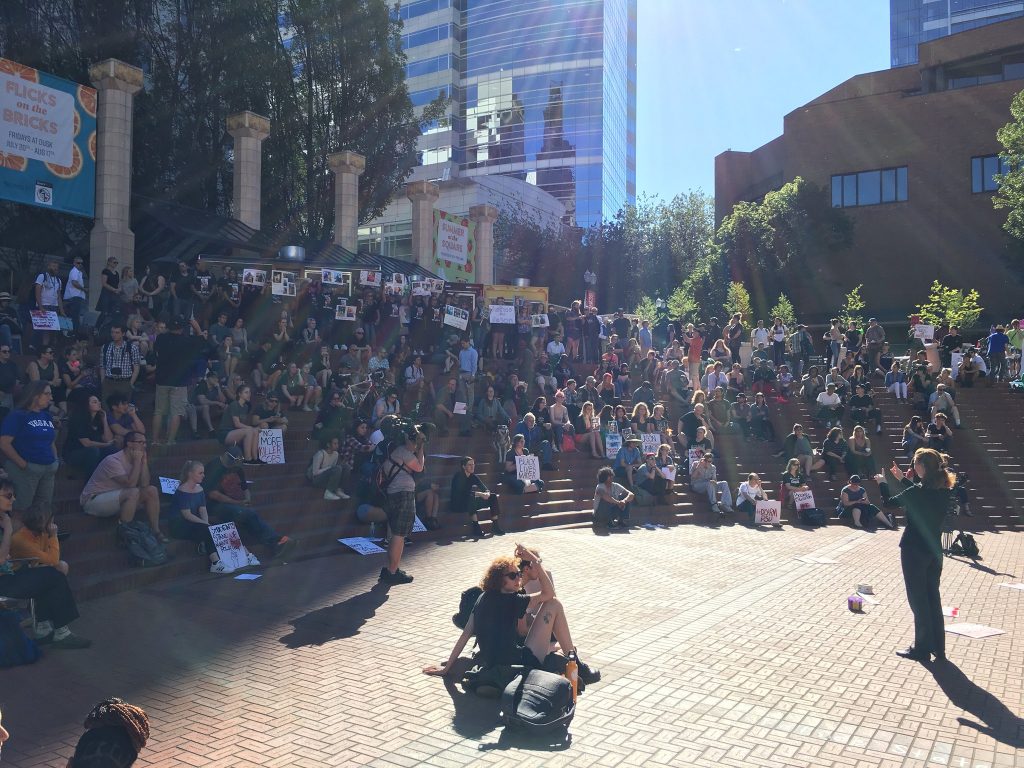 We challenged the rhetoric of the university and exposed the real reasons they made this decision. The PSU Board of Trustees claimed it would reduce sexual assault, yet they have ignored the serial rapist on campus. They claimed we were the only major urban university without a police force. The creation of the Portland State University campus police was intended to control space. Campus security have a history of criminalizing homeless people on campus, sweeping them off the campus. PSU wants to appeal to businesses. The creation of a police force was an investment for the university. The students’ voices didn’t matter.

After PSUSU members finished speaking we opened up the mic for students and those who knew Jason Washington personally. Many expressed their concerns with having cops on campus. Many people expressed their frustration with the university and how they have failed us. Andre Washington, Jason Washington’s older brother, spoke to the crowd. He claimed he is “disgusted” by what happened.

Some words from Andre Washington, the older brother of Jason Washington who was gunned down by Portland State campus security #JasonWashington #DisarmPSU #SayHisName #portlandstateuniversity #psu pic.twitter.com/D4CICX929D

After the rally, PSUSU and supporters took the streets and marched the Campus Public Safety Office (CPSO) at PSU. During the march we chanted “DisarmPSU”, “Say his name: Jason Washington”, and “P-S-U, we warned you!”. We reminded the university they have blood on their hands. This includes Officer Dewey, Officer McKenzie, Wim Wiewel, Rahmat Shoureshi and the PSU Board of Trustees.

At the CPSO office we were greeted by some of our comrades and PSUSU members closed out the action with impassioned speeches. We asked everyone in attendance to fill out a sheet with “I support #DisarmPSU because” and posted them all over the CPSO entrance. The community came together and left their mark. The CPSO office was covered in flyers, posters, signs, chalk, and pictures of Jason Washington. 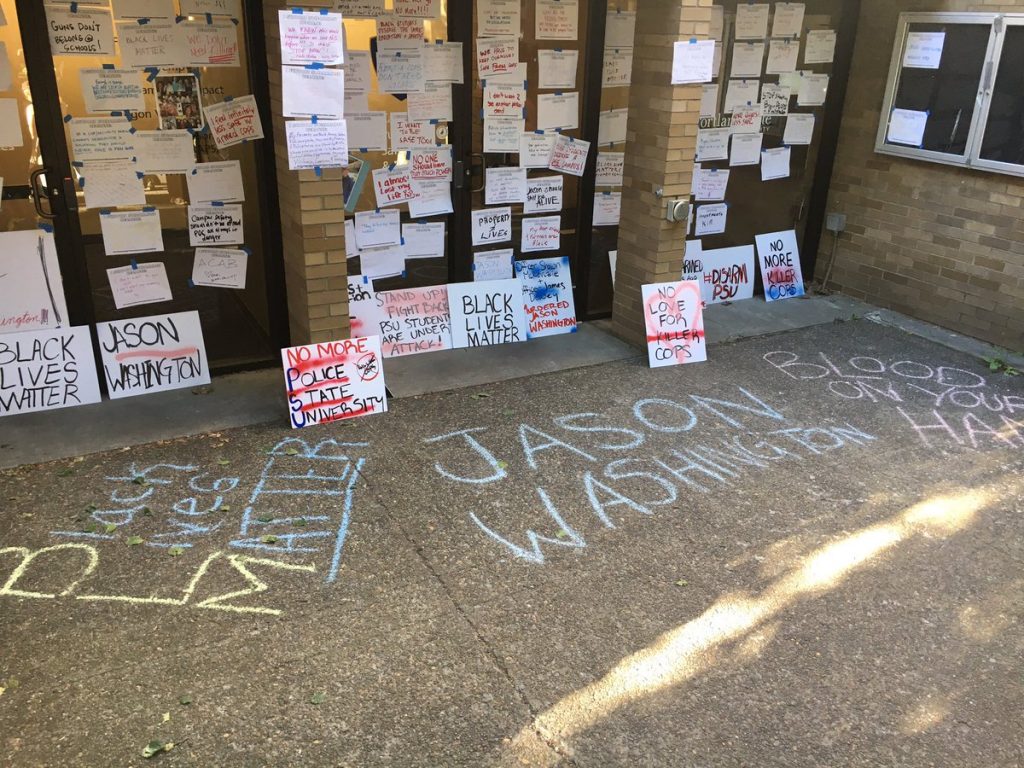 Our makeshift memorial and #DisarmPSU display was cleaned up in less than 24 hours to the dismay of our organizers and supporters.

We did, however, leave a strong message: “We will be back”

Below are videos of the speakout