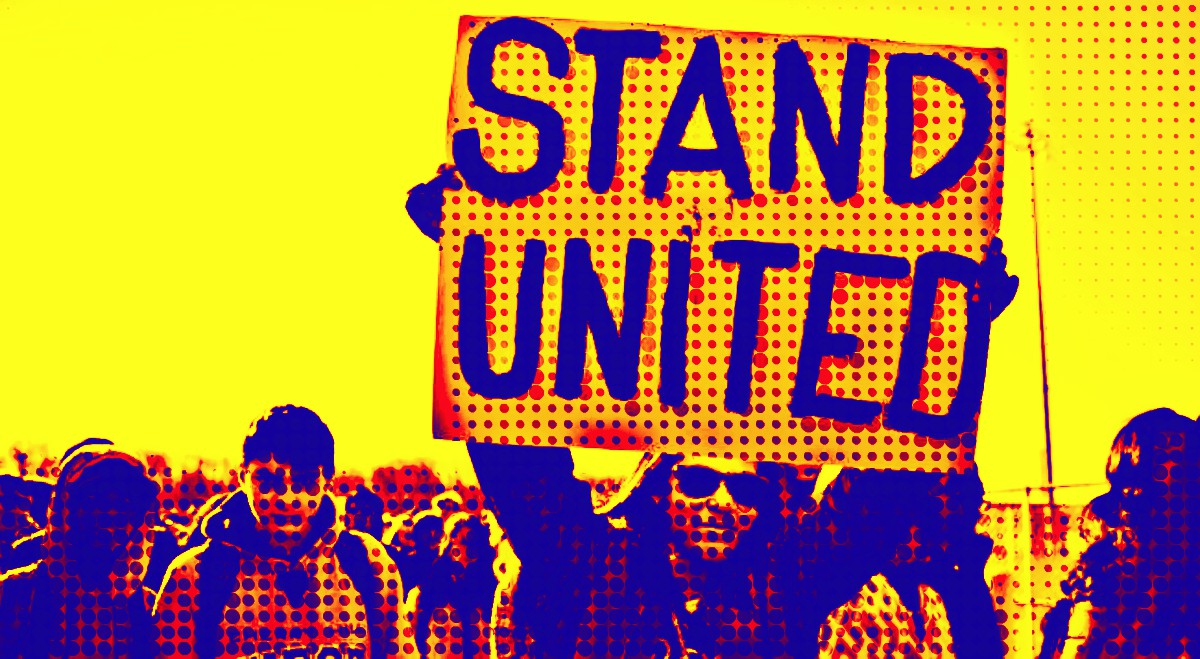 What follows is a call to engage with the growing student movement in the US and offers a few resources towards that end.

This past week we have seen students across the so-called United States taking to the streets for the #NationalWalkoutDay. Initially it seemed that many radicals were just cautiously curious, as issues of gun control are often the realm of the Democrats.

As things grew closer it became apparent that there was something more building up inside middle and high schools everywhere. In an early walk-out in Stockton, CA students broke a cop car window, and ran gleefully through a nearby mall. Students are beginning to recognize that they can’t wait for teachers, principals, police, or politicians to listen to them.

As momentum began to build, many began to strategize ways of engaging with the student demonstrations, hoping to connect with the more rebellious elements amongst the student body. Many of us watched and cheered over the last couple of days as students broke through fences, tore down an American flag, chanted against the police, showed resilience and solidarity when the police attempted to arrest and repress them, and even fought a pro-Trump student who attempted to disrupt their demonstration from within. We have been hearing from friends with connections in public schools that many students saw some heavy disciplinary action like suspensions and arrests, but which largely resulted in no charges. In Chicago its reported that around 1,100 students were given detention for participating in their walkout. Naturally, mainstream media isn’t touching much of this.

So, when we became aware that comrades in a couple places were preparing flyers and pamphlets to spread some solidarity to students and let them know that there are those that will have their backs if they choose to resist, we thought it would be a good idea to get those flyers up online in hopes that folks would take it upon themselves to get out there and connect with students if they just had some materials. Saturday, March 24th, will see rallies and marches under the banner, March For Our Lives, and you can find out if there is a demonstration in your city here. We recognize that this is also the day of solidarity with Afrin. We encourage intersectional and simultaneous participation!

These materials are free for distribution. We encourage you to distribute any of these or make your own and offer the students alternatives to legislation, gun control, and state politics. Think creatively and don’t stop at handbills. Try solidarity demos, banners, and if you can, connecting directly with kids in school! The school administrations and police are relying on the hope that people in the broader communities around these schools aren’t paying attention, and the a little can go a long way. Any visible lines of solidarity outside of parents and teachers of the students could send a strong message. 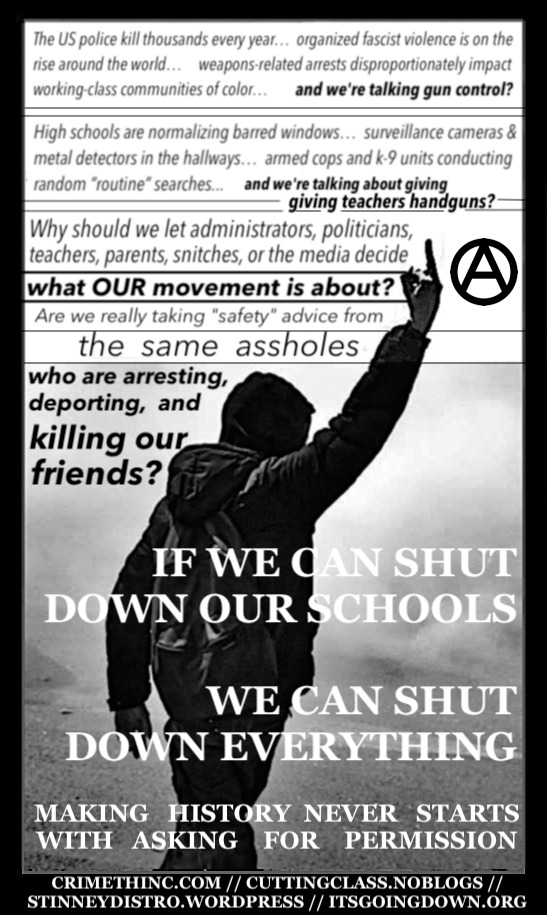 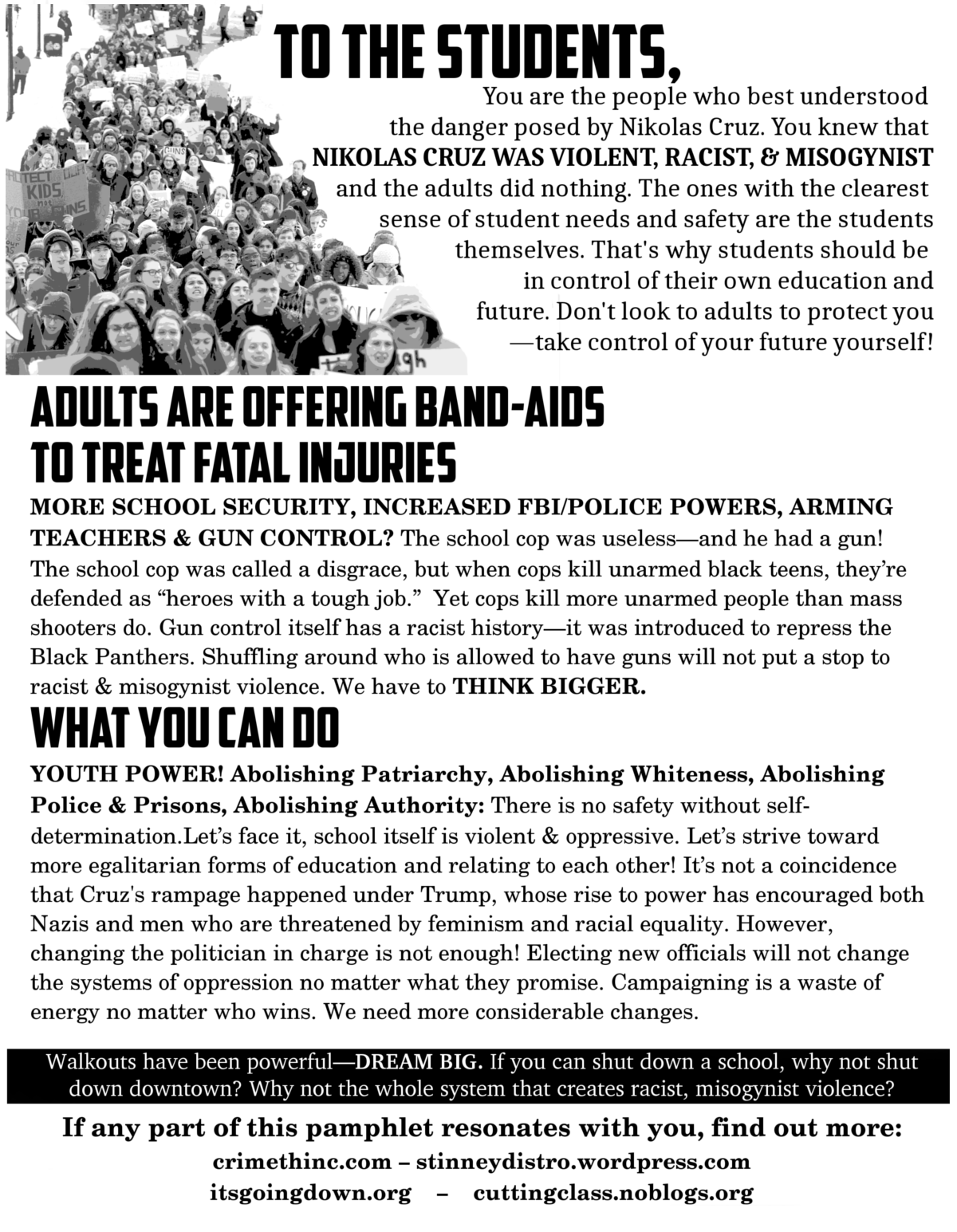 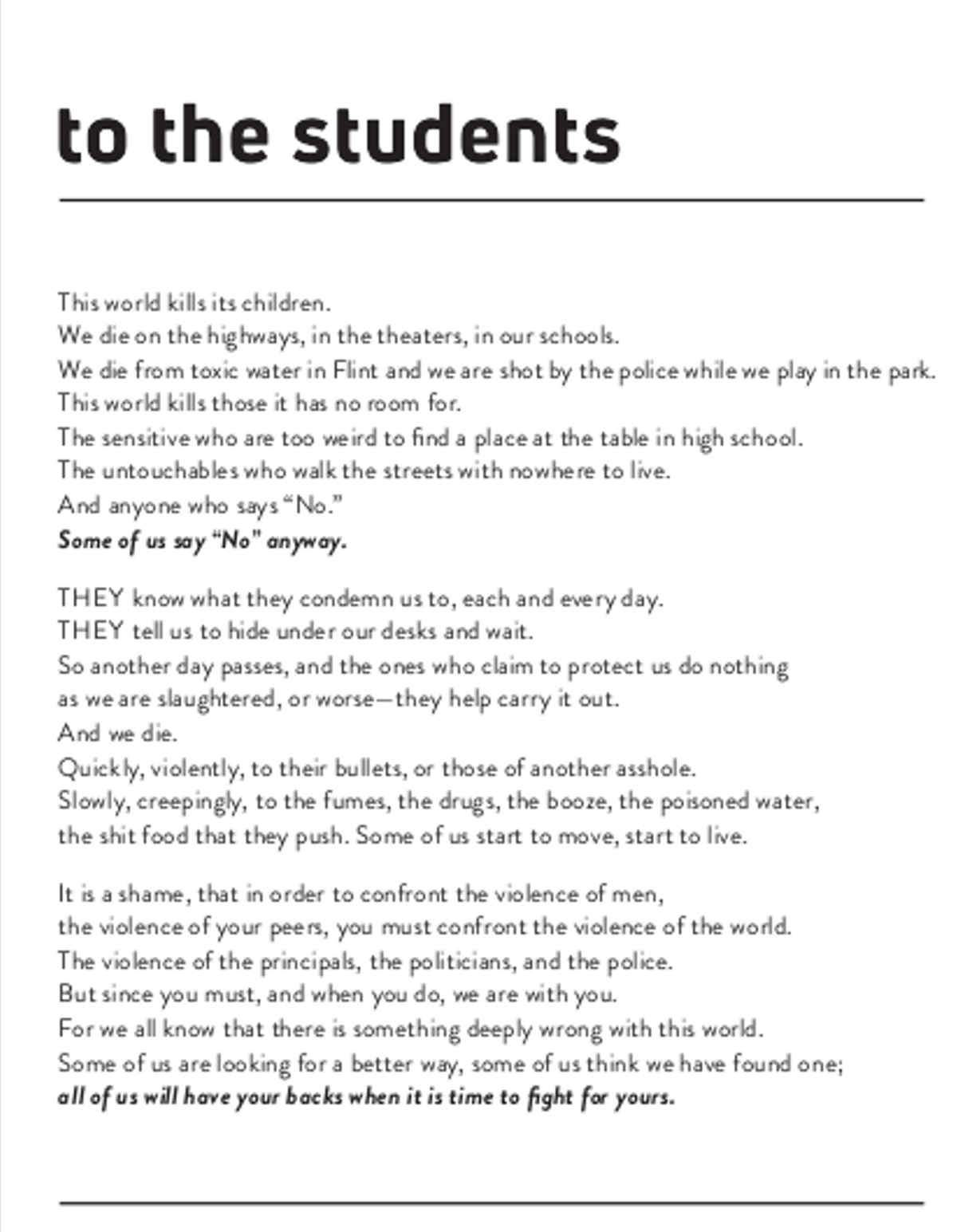 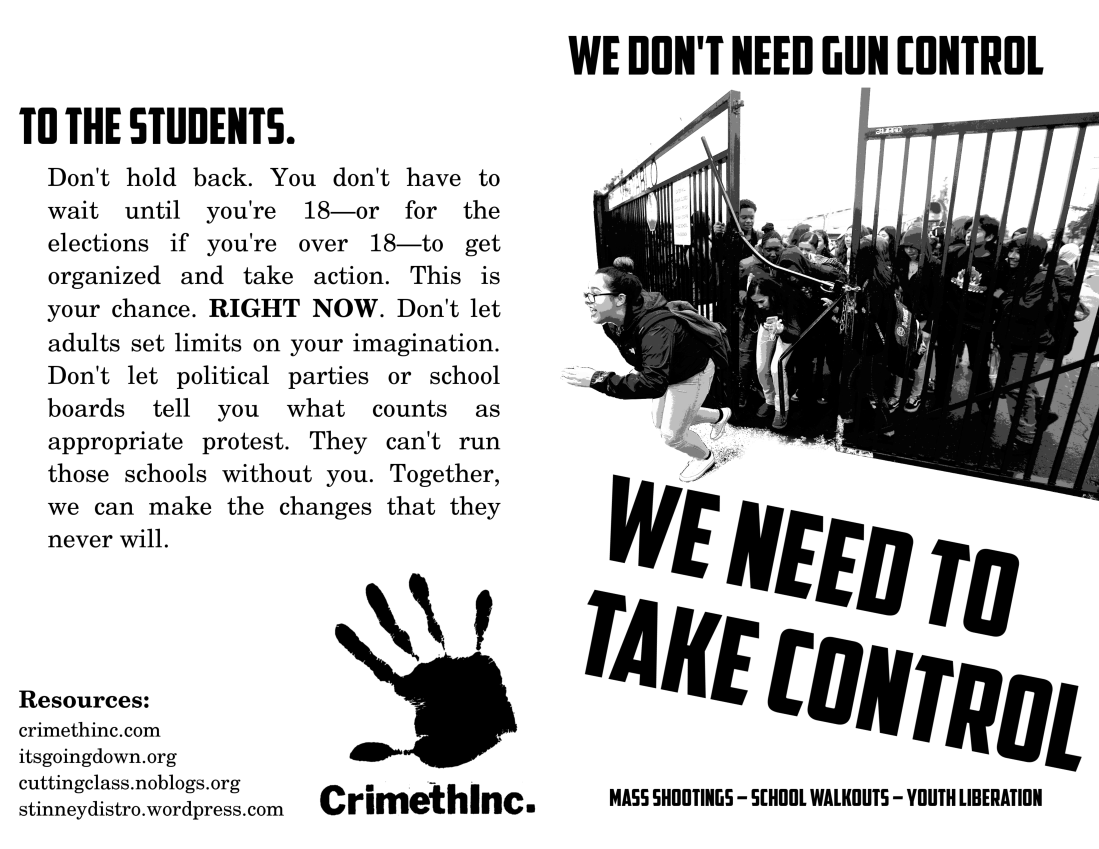 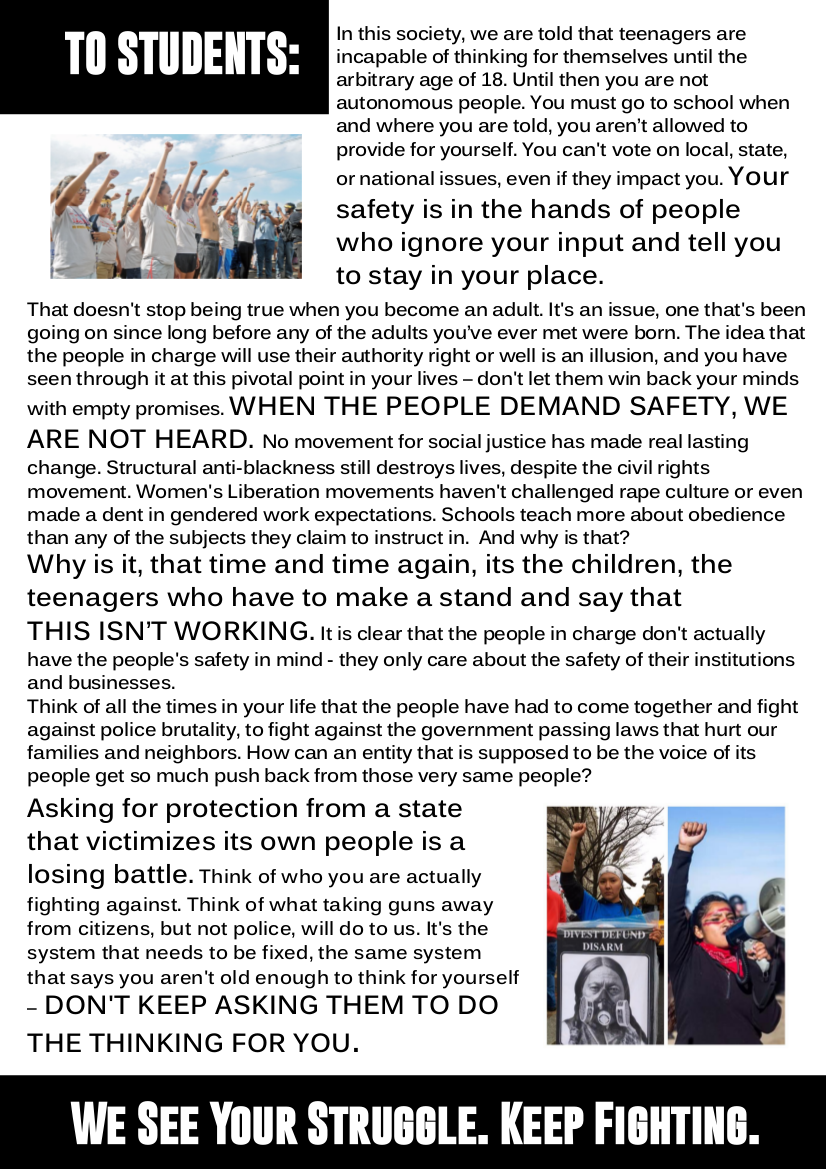 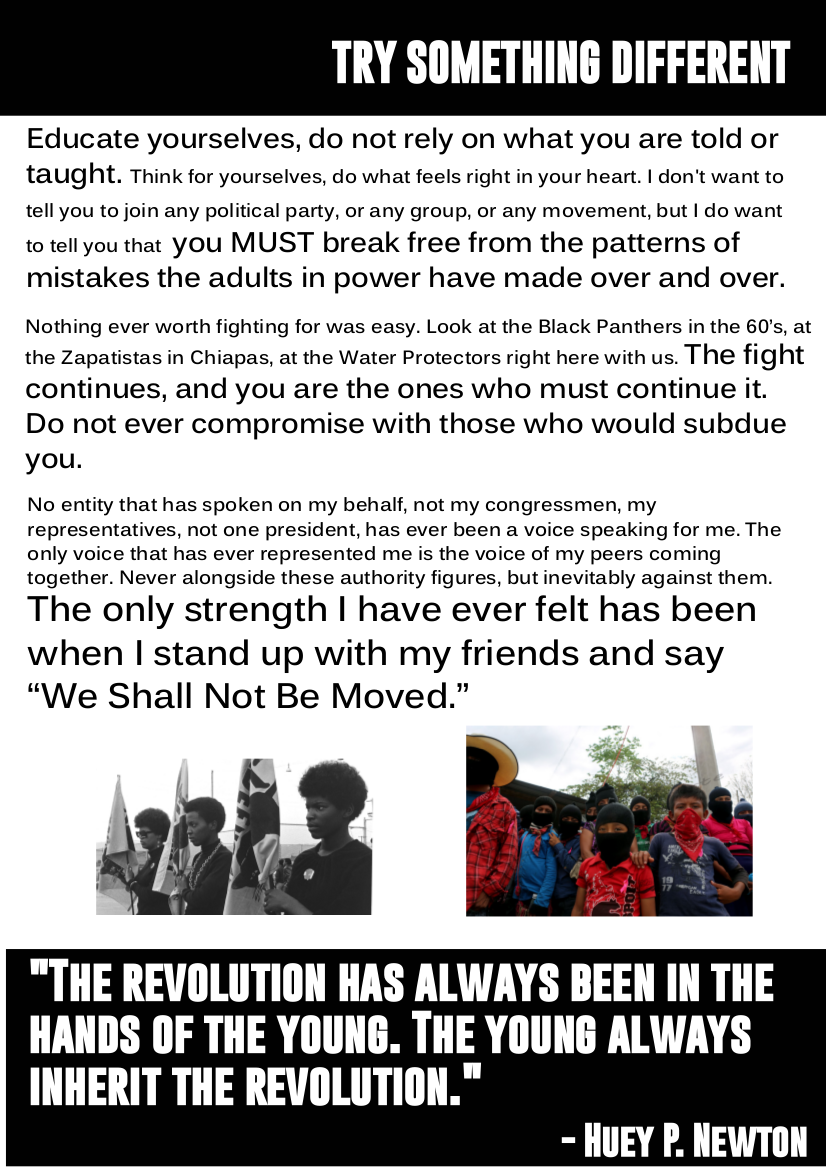