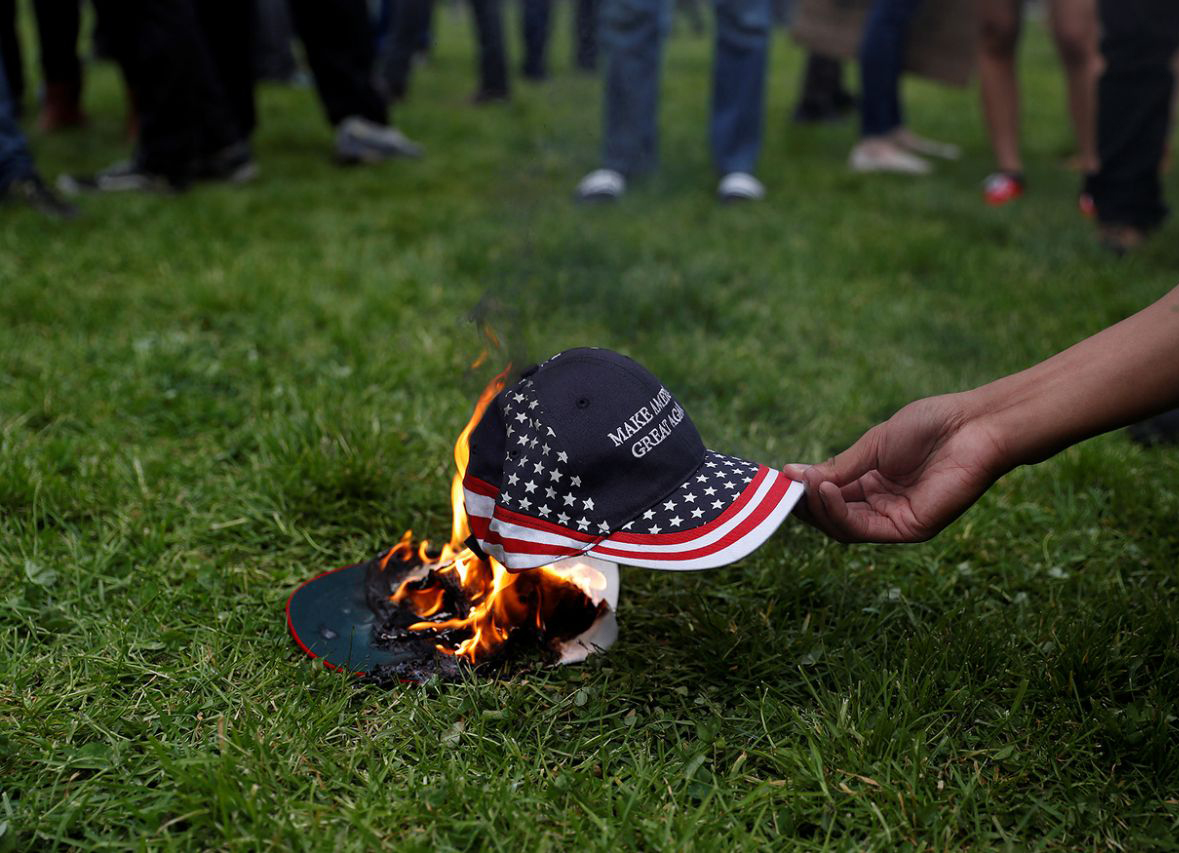 On February 1, 2017, crews of anti-fascists and anti-racists defeated Milo Yiannopoulos and the Berkeley College Republicans (BCR) at UC Berkeley, disrupting the alt-right and fighting back against the fascist creep under Trump. True to their bankrupt selves, liberals held hands with both mainstream conservatives and the far-right alike as they joined in condemning the antifa’s militant and direct action. Soon after, the same right-wing that had vilified antifascists and the no platform principle found themselves doing the same thing to the same person. Conservatives dropped Yiannopoulos from the lineup of speakers at CPAC 2017 and his book deal was cancelled after widespread outrage over his past anti-consent and pro-pedophilia comments. Milo eventually resigned from Breitbart and his career has been severely set back, if not finished for good. But what about BCR, which plans to host Ann Coulter to speak at UC Berkeley on April 27th?

The Berkeley College Republicans have dealt with significant blowback on top of Yiannopoulos being shut down, and rightfully so. In addition to inviting a fascist recruiter to speak at UC Berkeley, members of BCR have attempted to infiltrate meetings, attack and harass political opponents, lied to the media, and even hosted a white supremacist activist. In response to the alt-right organizing that’s taking place in Berkeley, and in the context of a number of far-right terror incidents across the country, how can we hold the Berkeley College Republicans accountable and defend ourselves against the threat of fascism aimed at our campus and our community? 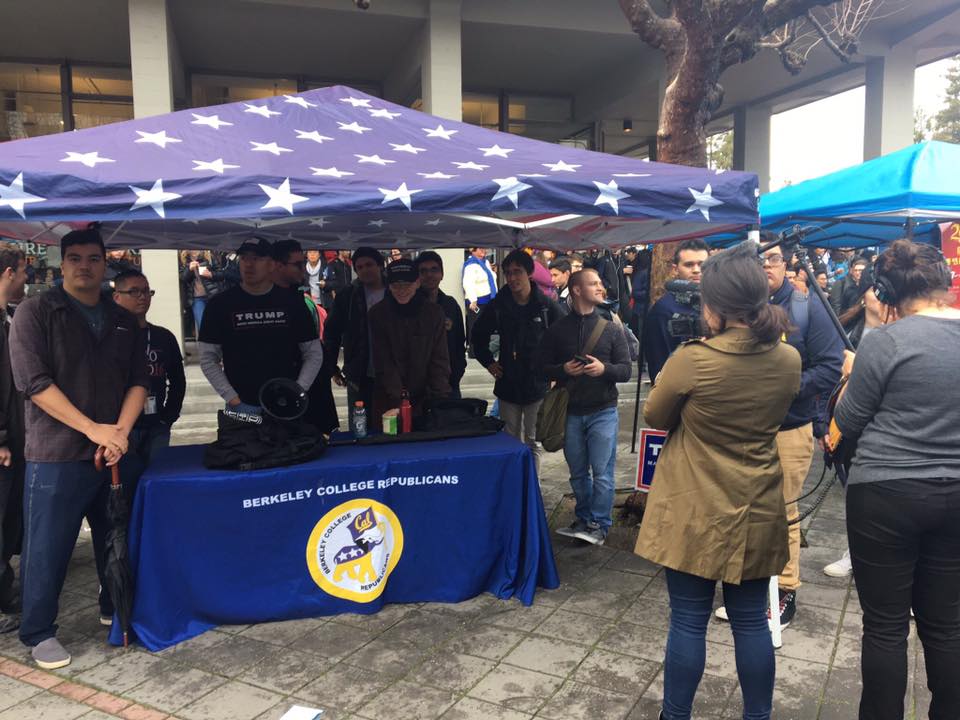 On January 20, 2017 Nathan Damigo received a warm welcome from BCR and was allowed to stand among official members and leadership at the club’s table on Sproul Plaza. Nathan Damigo, a CSU Stanislaus student who goes by “Fashy Haircut” on Twitter, is a white supremacist and founder of the fascist “fraternity” organization Identity Evropa, which he runs out of Oakdale, CA. Of course, Damigo wasn’t at the BCR table just to stand around with college students that are almost a decade younger than him. No, Damigo came to UC Berkeley to recruit for the fascist and white supremacist alt-right movement. The relationship that BCR has been building with Damigo and the alt-right resulted in BCR’s Naweed Tahmas making an appearance on Red Ice TV, a neo-nazi media outlet. Damigo briefly interviewed Tahmas, who shared his thoughts about Trump on Red Ice’s inauguration day special.

Being that Naweed Tahmas is a member of BCR and helped to organize the failed Milo Yiannopoulos event at UC Berkeley, his appearance in a video produced by Red Ice TV with the help of Nathan Damigo is alarming. Red Ice did a profile on Milo Yiannopoulos in September 2016. In the video, hosts Henrik Palmgren and Lana Lokteff position Yiannopoulos to the left of their own politics, lamenting the fact that Yiannopoulos doesn’t go as far to the right as they would like him to. On the other hand, Lokteff acknowledges the opportunities that Yiannopoulos tour promised to provide to the kind of movement that Red Ice wants to build.

“There’s going to be more of these young people jumping on the bandwagon. Not because they care about white survival or understand that part, but because it gets attention because it’s counter culture. Hopefully, once they get in there we can actually convert them to the real thing.” (16:31)

The far-right’s interest in organizing and networking during a Yiannopoulos speech is precisely the reason why anti-fascists shut down his talk at UC Berkeley. The fact that BCR is willing to publicly associate with someone like Nathan Damigo should be taken seriously. Moreover, Damigo is not the only open and self-identified fascist that BCR has a relationship with.

The college republican club also has ties to Moshe Daniel Quillinan, a local fascist based in Berkeley, CA. Posts on Quillinan’s Facebook page frequently discuss his fascist and racist politics as well as his desire to kill communists and anyone on the left that he considers a barrier to a more pure society. Anti-fascists have noted that Quillinan is a regular at BCR’s meetings and he has been seen with BCR members several times. One such instance was on February 17, 2017, when BCR’s Treasurer David Craig and one other member were seen with Quillinan at a protest against Trump on the UC Berkeley campus. Quillinan would later appear at the March 4 Trump rally in Berkeley with weapons and armor, looking for fights (and losing them).

To summarize, in addition to some members of BCR espousing fascist and white nationalist politics on their own social media accounts, the club is also beginning to get cozy and network with local white supremacists that have a history of violence.

However, if you read anything coming out of the BCR camp, you’ll see them declaring everyone else a fascist because we reject their horrible far-right bullshit. Gaslighting is a usual maneuver for this band of idiots just as much as it is for the elite billionaire in the White House that they worship. In their article “Conservative speech will not be stifled by violence,” Pieter Sittler and Troy Worden of BCR do just this.

“The fascists of the future will be called anti-fascists,” said Huey Long long ago. On Feb. 1, we found out who the real fascists on this campus are, and they are not the Berkeley College Republicans.

At this point, the community understands the claim being made here to be demonstrably false. The members of BCR and their associates have made their fascist and racist views clear in their own words, which they’ve to this day never refuted or claimed were falsely represented. Sittler and Worden were eager to use this quote above, so eager that they misattributed it to Winston Churchill when the article first appeared online. They don’t care where the quote is from, they just like the way it sounds, and they must not understand that it’s actually about them.

There is overwhelming evidence that BCR membership and their associates include a number of white supremacists and neo-nazis with violent pasts, but despite this BCR continues to double down and say that anyone that opposes them is the “real” fascist. They’re constant insistence on this point is in fact the college Republican group performing a false position of anti-fascism. It’s this performance on the part of BCR that constitutes the truth of the quote they attempted to weaponize against their opponents. The Berkeley College Republicans are the false anti-fascists that are actively recruiting for a far-right political movement.

While thousands of students and community members turned out on February 1 in a united effort to shut down BCR’s Milo event, many in the campus community confront and oppose the club on a near daily basis. Lines are being drawn between those on campus that are striving for total liberation and those that wish to maintain the forces of oppression present in our society. Unfortunately, the liberal politics that dominate the campus administration and student political structure, as well as the front groups that are sympathetic to BCR, have been pushing back against the antifascists and aiding BCR in legitimizing far-right discourse on campus.

For instance, a relatively new student organization called BridgeCal has been working to promote dialogue across political lines. BridgeCal was founded by UC Berkeley students Alexandra Tran and Pranav Jandhyala. Alexandra Tran is the founder of Cal Libertarians and she hosted BCR’s Milo Yiannopoulos event on Facebook on her personal account. Pranav Jandhyala gained attention when he provoked protesters during the February 1 demonstration against Yiannopoulos by sticking his cell phone in peoples’ faces, later claiming he was a random victim of violent protesters that smashed his phone for no reason. Jandhyala has also gone on to write horribly inaccurate accounts of clashes between Trump supporters and the local Berkeley community, pinning all responsibility for violence on the left while turning a blind eye to the violent racists that his work validates and legitimizes. It was indeed the defeat of BCR that jump-started Jandhyala to action, who spoke to the Daily Californian saying,

BridgeCal claims to be independent, but its founders are highly sympathetic to BCR. Moreover, the function of the BridgeCal discussions ultimately only serves to legitimize BCR’s far-right politics by forcing debate and discussion on their ideas as if authoritarianism and ethnic cleansing are legitimate political positions to take. Since the defeat of BCR on February 1, BridgeCal’s discussions have been themed exclusively on the contentious issues that BCR wants to challenge, such as immigration. Indeed, BridgeCal is co-hosting Ann Coulter at UC Berkeley on April 27th along with BCR.

The administration at UC Berkeley works in a similar manner. Every time there is backlash against the far-right organizing on campus, the administration urges the students to be nonviolent and passively respect all political views. At the same time, they declare to the public that UC Berkeley is a sanctuary campus. We know the University of California could never be a sanctuary as long as it’s run by the likes of Janet Napolitano, who deported record numbers of people at the Department of Homeland Security. She doesn’t get a pass now just because Trump is in the White House and may appear “worse.” At the same time that other schools are deciding to contact the FBI about Nathan Damigo’s neo-nazi posters, the UC Berkeley administration has stayed silent about their appearance on campus since March of 2016. These contradictions on campus will no doubt lead to increased and sustained tensions.

Against BCR, Against the Alt-Right

It’s not acceptable that BCR and other far-right individuals and groups that they associate with are organizing on campus and spilling into our local community. Why should we let them host a fascist like Yiannopoulos, who planned to out undocumented students in partnership with David Horowitz and his “Freedom Center,” and then give them a pass as they plan to bring Ann Coulter as a follow up? Jack Palkovic, a member of BCR, has been organizing with Nathan Damigo of Identity Evropa (the two were seen hugging on the subway) as well as the group associated with Rich Black, Kyle Chapman, and Daniel Quillinan, who are planning on attacking the local community for the second time on April 15th.

At the same time that these forces organize, so do we. So far, BCR has been confronted several times on Sproul Plaza, resulting in their club and Trump signs being repeatedly destroyed. Their push to recruit for the alt-right with their Milo event was completely shut down. Club members have been punched multiple times. Recently, in nearby Albany, high school students got classes cancelled for a day when they mobilized against racist attacks and nazi salutes at their school. Locally, we’ve seen a wide range of tactics and strategies that have been employed and found useful and effective.

Let’s not only keep BCR and the Alt-Right in check, but advance our own politics in their place. There has been a lot of energy and momentum built up behind anti-racist and anti-fascist movements in the last few years with Black Lives Matter and the resistance to the illegitimate presidency of Donald Trump. Now is the time to organize and direct that energy strategically and with an acceptance for a diversity of tactics in order to push the fascist scum off the block and really make UC Berkeley a sanctuary antifa zone.

*14 88 is well-known code used by white supremacists. The number 14 refers to a 14-word slogan used by David Lane of the white terrorist group The Order, “we must secure the existence of our people and a future for white children.” The number 88 is a reference to HH, or “Heil Hitler.”