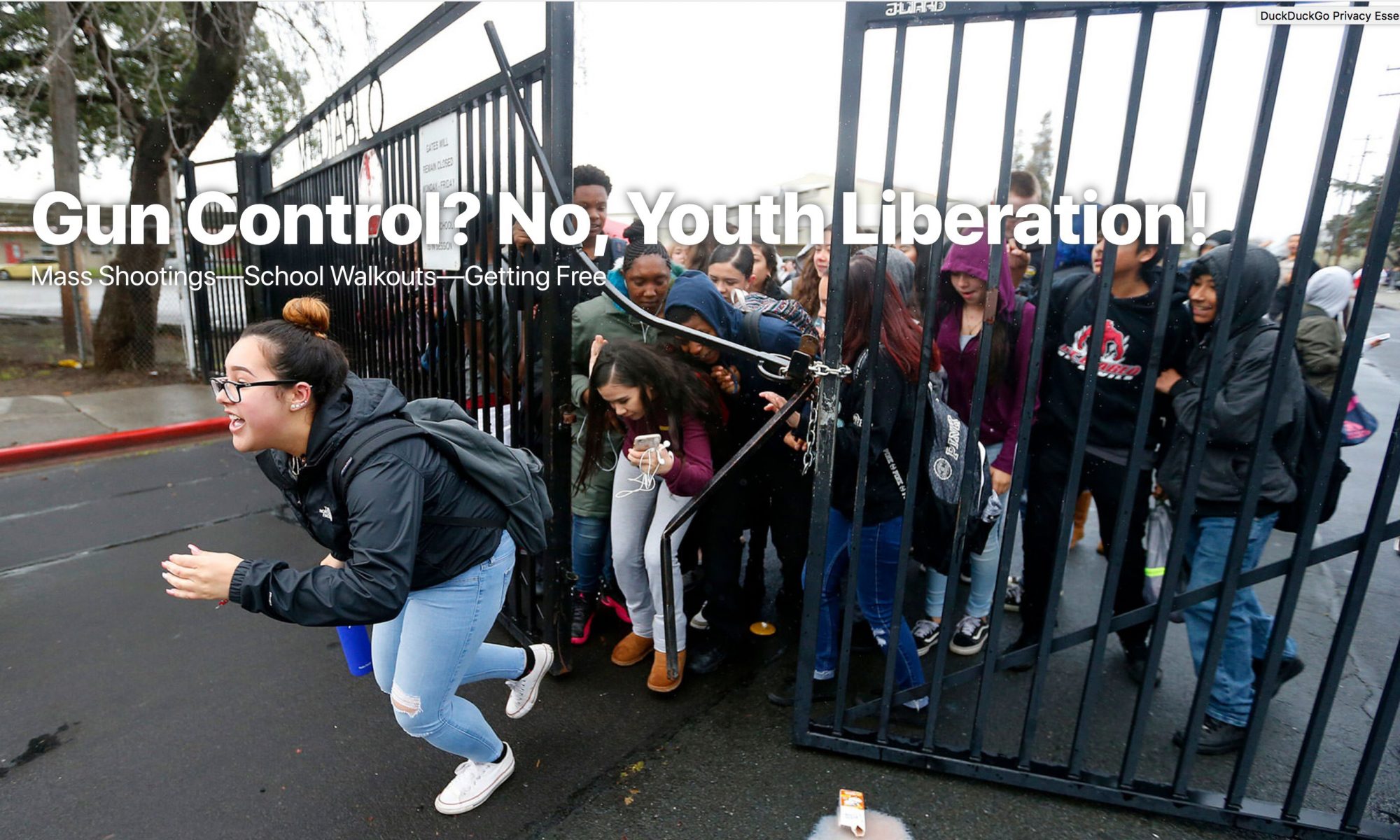 Following the shooting at Stoneman Douglas High School last month and ahead of the March for Our Lives in Washington, DC this coming weekend, people all around the United States are talking about gun violence. As politicians seek to exploit horrific tragedies to consolidate even more power for the state and channel youth outrage into support for the Democratic Party, we have to direct attention back to the structural factors that cause these mass killings in the first place. We’ve prepared the following poster, zine, and handbill addressing the root causes of school violence and the solutions that genuine grassroots organizing can offer. Please print these out to distribute at your local high school, walkout, or protest!

Another mass shooting. We’re horrified, but we can’t say we’re surprised. These shootings have been going on for as long as we can remember. The victims at Marjory Stoneman Douglas High School weren’t even born when Columbine happened—and mass shootings have only gotten worse since then. Four of the ten deadliest mass shootings in American history have taken place in the last two years.

Why the last two years? The answer tells us a lot about this society. 2016 and 2017 saw a wave of backlash against the struggles and visibility of queer and trans people, women, and people of color, especially the Black Lives Matter movement. The reactions came in many forms: “men’s rights,” the alt-right, the Trump campaign. But all of them were based in the anxiety that straight, white men are losing their power over society—and it’s no secret that mass shooters tend to be angry white men with a history of hating women.

Dylann Roof, who killed nine people at a black church in South Carolina in 2015, left behind a manifesto claiming that black people are inferior and bewailing the supposed “disappearance” of the white race.

Omar Mateen, who killed 49 people at the Pulse nightclub in Orlando in 2016, was training to become a police officer. He had physically abused his former wife on a regular basis.

Stephen Paddock, the white Trump-supporting millionaire who carried out the deadliest civilian mass shooting in American history in 2017 in Las Vegas, was notorious for berating his girlfriend in public.

Devin Kelley, who beat his wife and stepchild while in the Air Force, looked up to Dylann Roof and copied his attack, entering a church in Sutherland Springs, Texas in 2017 and shooting over forty people—25 of them fatally.

Nikolas Cruz, who killed 17 students at Marjory Stoneman Douglas High School, posted comments online degrading Muslims and threatening to kill anti-fascists. His classmates knew that he wore a MAGA hat, had been abusive to his ex-girlfriend, and had assaulted her boyfriend and called him racial slurs. Later, it was discovered that Cruz carved swastikas into the ammunition magazines he used on the day of the shooting.

The problem of mass shootings goes much deeper than just the last couple of years. It cuts to the heart of American culture. Our whole society is built on a competition to take power over others: rich over poor, politicians over citizens, men over women and gender non-conforming people, white people over people of color. Politicians on both sides of the gun control debate agree on the need for more resources to diagnose and treat mental illness; but the desire to have power over others is not a mental illness, it’s a social one. Mass shootings will continue as long as this competition for power is the basis of our society.

The US government is holding 2.3 million people captive in prison—as many people as there were in the Soviet gulag system at its peak. Police routinely brutalize and murder people of color with impunity. In 2017, cops shot and killed almost a thousand people, over twice the number of people who died in mass shootings that year. Where are the Democrats clamoring for gun control when cops routinely shoot unarmed teens?

The United States itself was founded on genocide, slavery, and white supremacy. Last year’s shooting in Las Vegas may have been the deadliest civilian shooting in US history, but the two deadliest gun massacres on American soil were carried out by the US military—against former slaves in the Fort Pillow Massacre and against the Lakota Nation in the Wounded Knee Massacre. Soldiers shot between 200 and 300 people in each. We won’t even mention the countless invasions, coups, and massacres that the US has perpetrated elsewhere around the world.

White people have carried out some of the most violent acts in the history of the world, but you don’t hear them described as terrorists when they shoot up a school or bomb another country. Why? Violence directed down the hierarchy gets normalized and becomes invisible, while violence from those lower on the hierarchy against those above them provokes shock and outrage.

This is why those in power cannot offer real solutions—they’re too invested in the same system of power that causes mass shootings.

What’s different this time is that instead of waiting for solutions from leaders, one of the groups targeted by mass shootings—students—took power back into their own hands. Not power over, but power with each other.

In the days after the Parkland shooting, teens across the country walked out of their schools. On the one-month anniversary, the largest school walkouts since the civil rights movement took place. It’s only thanks to disruptive direct action outside the normal political channels that the topic of mass shootings has remained part of the national conversation.

Authorities have responded by threatening suspension in some school districts and imposing limits on the walkouts in others. (“OK, but just for 17 minutes.”) In Florida, politicians and even the NRA hurriedly responded to student demands in order to seem relevant. Whether they were for or against gun control, they all wanted to send the same message: “You have to go through us to change things.”

It’s time to stop depending on adults who are invested in America’s system of power to solve the problems it produces. It’s time for young people to get together and set out on a different path.

Gun Control Is a False Solution

Gun control is a false solution—and not for the reasons you hear from the NRA. In fact, the NRA has backed the most significant steps towards gun control in order to impose limits on black people’s efforts to achieve liberation.

The NRA was founded in 1871, immediately after the original version of the KKK was outlawed. One of their primary goals was to keep guns out of the hands of recently freed slaves. Later, in the South, the NRA crafted the legislation and licensing schemes that denied Martin Luther King, Jr. the weapon he applied for after his house was firebombed. You’d never know it from NRA propaganda, but modern gun control began when the NRA backed Ronald Reagan in outlawing open carry in California in order to disarm the Black Panthers’ armed citizen patrols.

The United States government is racist—its cops are racist, its courts are racist, and any new laws they pass will be used chiefly against the poor people and people of color who are always targeted by the state. More laws won’t protect us when it’s the same racist system enforcing them.

School Security Is a False Solution

Making schools even more like prisons won’t give us freedom or safety. School is already violent. Teachers focus on obedience more than education, administrators control where you can be and when, school cops routinely brutalize and criminalize students. The cop at Marjory Stoneman Douglas High School did nothing when he was needed most!

There is no safety without self-determination. The people who knew best about the threat that Nikolas Cruz posed were his own classmates—they knew about his bigotry, the threats he repeatedly made, and the way he was abusive to his ex-girlfriend. The solution is not to deputize students to report on each other to adults, but to take that power from teachers and administrators and school security and give it back to the students themselves. Students should have power over their lives and the conditions of their education.

Mental health efforts aren’t enough. The alienation we feel from each other in a world mediated by technology and the ways the economy and the school system condition us to compete against each other can make anyone feel worthless, helpless, and desperate for power. We need to create a society in which our self-worth isn’t based on competition, in which each person’s well-being is understood to depend on everyone else’s.

Linking mental health efforts to state control, surveillance, and incarceration will just give the state another tool to increase incarceration and social control. The government doesn’t sincerely care about stopping mass shootings—they’ve been getting worse for decades now without any change coming from the halls of power.

What You(th) Can Do

Try youth liberation! If you can shut down your school, why not downtown? Why not the highway? The economy itself? The same people who are letting oil companies poison our water, helping racist police get away with murder, keeping us from getting the health care we need, and trying to force us back into the boxes of gender—they’re the ones who want students to stay in their place, obeying orders and conforming and regurgitating what teachers tell you. Administrators need students for their schools, but you don’t need them.

Start a secret club for the abolition of principals. Form a union to defend students from authoritarian administrators. Host viewing parties or reading groups about cool ideas and discuss what you would want to do and learn if you were in control of your own lives. Students like you have organized assemblies in Quebec, forced back police lines in Chile, shut down airports in Mexico, and stood up to tanks in Tiananmen Square. You can network with young people around the world who are rebelling against the same things. Talk to each other, learn from each other’s efforts, and take that inspiration to the place you live. Adults might be able to help you with these things—provided they’re not too busy trying to control everything—but they can’t do them for you.

Solidarity! The student-led fight to end mass shootings connects to lots of other struggles for liberation. People working against police oppression can tell you how cops perpetrate and exacerbate gun violence in black communities. Anti-fascists can tell you how they track white supremacists who aim to promote the toxic masculinity and white resentment that cause mass shootings. Agitators from worker-led unions can share ideas about how to organize and make decisions collectively. Women and gender non-conforming people who practice self-defense can share techniques that young people can use too.

Don’t hold back. You don’t have to wait until you’re 18—or for the elections if you’re over 18—to get organized and take action. This is your chance. RIGHT NOW. Don’t let adults set limits on your imagination. Don’t let political parties or school boards tell you what counts as appropriate protest. They can’t run those schools without you. Together, we can make the changes they never will.